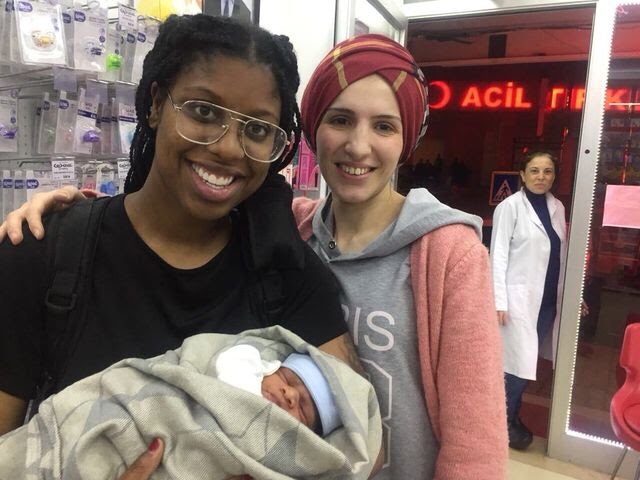 Tia Freeman a 22 year old Air National Guard member delivered her baby alone in a Turkish hotel using YouTube, a shoestring, and a pocket knife. In January freeman found out she was pregnant and purchased tickets thinking “as long as the baby doesn’t come early I’ll be fine.” Freeman arrived at the airport feeling cramps. During the 14 hours flight Freeman felt extreme discomfort, checked into her hotel room sweating, nauseated and in the throws of contractions, Freeman checks into her room and begins to research water birth using YouTube and wikihow. She filled a tub, and before the tub filled halfway she felt the need to push. She gave 5 or 6 pushes and her baby appeared in the tub, during her pregnancy she did not wish to know the gender so after eye final push she rushed to find out. She delivered a boy, and named him Xavier. She claimed off his cord with A SHOE LACE and cut the cord with a pocket knife. She continued watching videos in order to deliver HER OWN PLACENTA. She then contacted the embassy and was given a birth certificate. A gofundme was set up for Tia and her newborn baby as her savings was depleted on hospital care after her baby was born.

First of all… I applaud her badassery. Its beautiful that she had the experience of bringing her child into the world on her own. No hospital, No Dr, no drugs. I think if you have no medical issues, and an uncomplicated pregnancy home births are beautiful. Women have delivered their own babies for generations. This woman trusted her body, listened to her body and gave birth to healthy baby boy. That should be praised. So many women (self included) are unable to give birth at home, or have the joy of uncomplicated pregnancy so I applaud and personally advocate natural birth. So I’m all for her delivering her baby.

However if you had time google all this.. to me she had the wherewithal to book a trip when you don’t have a uterus full of baby. She 22, when you’re 22 you don’t gauge risk as well as you do in your 30’s or 40’s… I dated a man because we both liked tropical skittles and aqua teen hunger force I felt that was a deep enough connection… I was 22. I posted this on my person Facebook page (I love to see everyone’s point of view on topics I learn so many things just from reading the comments and opinions of others) I saw most women praising her for delivering her own child. I saw comments saying “She was safer in that bath tub than she would be in a hospital as a black woman, black women die more during childbirth in the u.s in hospitals” I never even though of that. I saw many women criticizing her waiting so late to fly knowing the risk of having her baby in a foreign country. I side with those people only because now this young woman has debt, a baby and a gofundme page…. I mean she has a hell of a birth story and a foreign birth certificate..but it’s the debt that makes me sad. One video interview Miss Freeman stated she delivered her baby in “true millennial fashion” well HUNTY true millennial fashion is sadly not having kids. Study show fewer millennial are kids because WE CANNOT AFFORD THEM….well at least the baby is cute…

That’s #thetea for the day.