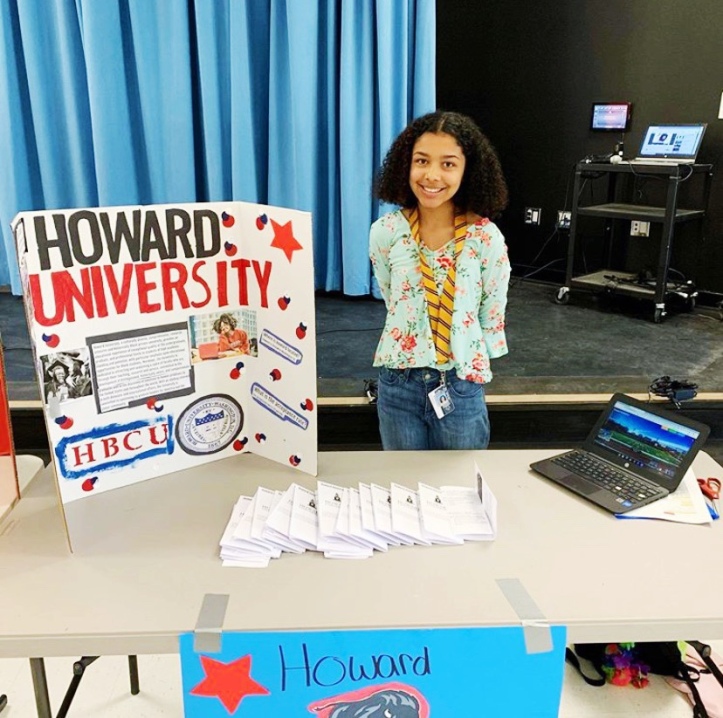 For the past few weeks Brooklyn has been working on a presentation about Howard University. Brooke is in the leadership program at her school.

Every year the leadership class has to set up a table and teach their peers about different colleges and what they have to do to attend those colleges.

Brooke had to create pamphlets and a PowerPoint. She was very excited.

Brooklyn has been expressing to me that she wants to attend an HBCU (historically black college universities) Brooke is very proud of being black.

She’s often teased for it because she half white.

Kids say “You’re not even fully black why do you care!”

Or the dreaded “You’re not black at all”

She speaks up for herself and says “I lived inside a black woman for 9 months.. I’m black”

Living in a predominantly white suburban neighborhood you would think Brooke would grow up wanting to assimilate and be more “white” but Brooke is actually the opposite.

She loves her black culture.

She loves her black roots and she’s dying to leave Temecula and attend an HBCU and learn even more about who she is.

I was so excited about her presentation when I picked Brooke up from school I asked her how it went she said:

“Mom, all the kids went to the UCLA table to hear that presentation and it really hurt my feelings. I ended up grabbing all the black kids and telling them “You need to hear this!” And then when my white friends would ask what an HBCU was I’d tell them.. I also let them know their parents need to do better. HBCUs exist! There are more schools than just UCLA!”

I could hear the frustration in her voice and she was right to be angry. She was right to frustrated. She wanted to share a part of her culture, a piece of her dreams and her peers couldn’t even comprehend that the building even existed.

She’s right! Parents need to teach their children about Howard University and other HBCU’s.

Other little black boys and girls need to know they have options. They have a UCLA too!

They need to know that schools exist for them. 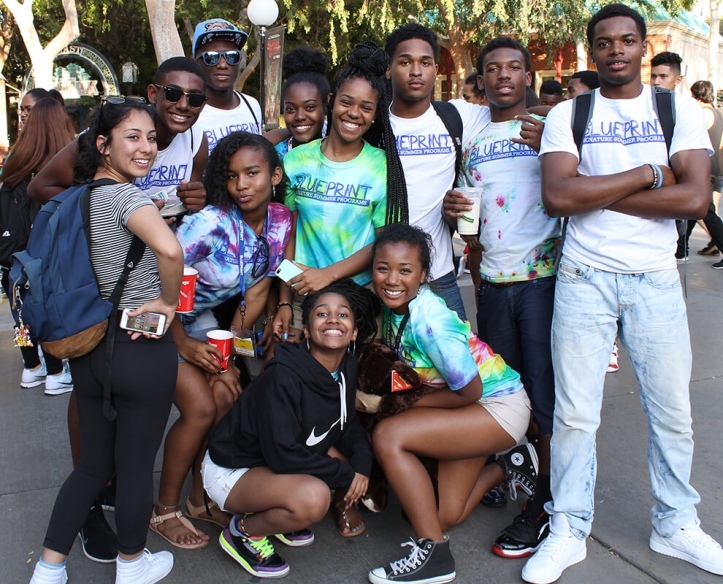 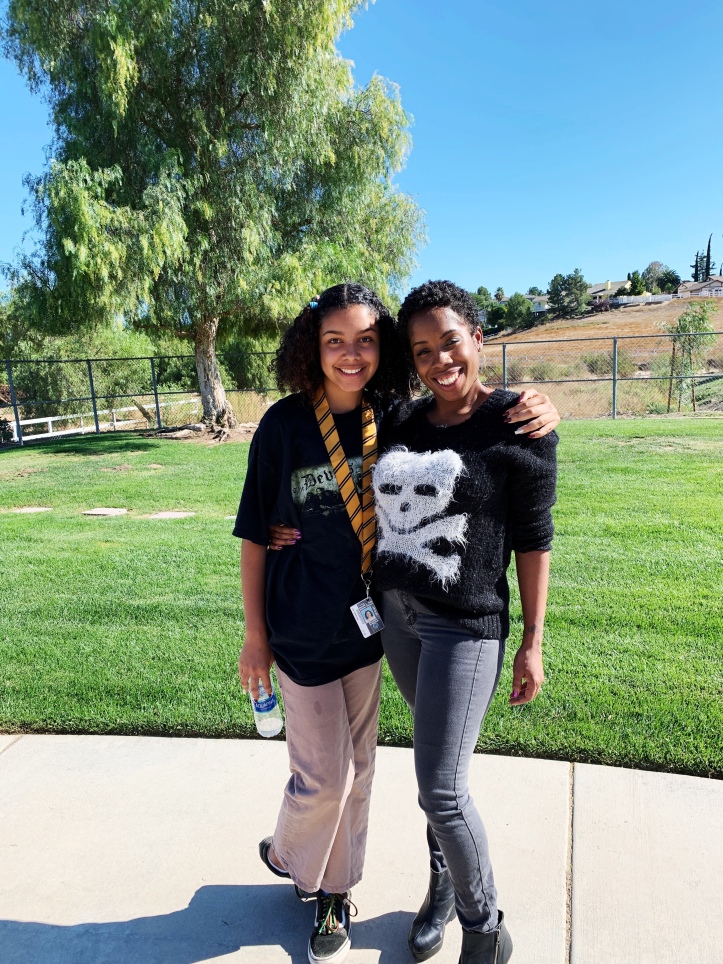 Brooklyn was raised by me and my Nana.. black women.

Brooklyn’s godmother is Scott/Irish/Welsh.. (all the white things) Brooke gets immersed into that side of her culture as well. I don’t just tell her “You’re black.. that’s it” not she’s immersed in both sides her culture.

As her sole parent and the black parent I had to teach my daughter about where she comes from and what that means.

I admire the bravery it took to bring people to your table and force them to learn about you.

Brooke is so beautiful to me.

Not just physically, but mentally.

She’s so intelligent and so full of charisma.. I hope she does go to Howard. 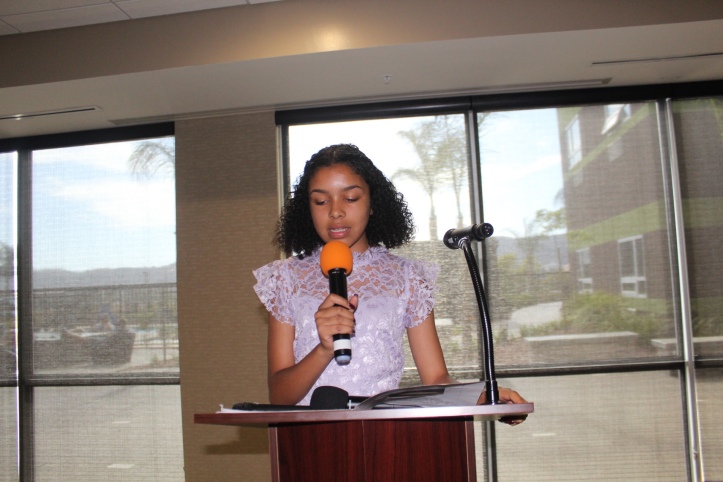 Brooke dreams of going to an HBCU, graduating then moving to New York to become a model.. I hope she does all that and more.

I hope she never stops being proud of who she is.

That’s a struggle for a lot of mixed kids.

I can’t relate, so I try to watch shows and relate..

I watched the show “Mixed-ish” I wanted to be cool and have something to talk to Brooke about.. to see if maybe she was experiencing any of the things the main character was experiencing in junior high.

We watched one episode and Brooke said.

“I’m black. I don’t feel like I have to choose a side. I have 3b hair God decided I was black for me”

Brooke went on to tell me

“I don’t like shows like that. That isn’t my experienced being mixed. Maybe that’s this character and that’s fine. I think it’s because I was raised in a black household, with black rules, culture, customs. I know that I’m mixed but identify as black. I don’t have this huge identity crisis. I know I’m black. When I grow up society will see me as black regardless of what my friends try to classify me as because of my skin tone.”

I think no matter where you raise you kids.. they want to know who they are and where they come from.

Brooke sees the kids at school have such pride in being Nordic, Irish.. so proud of the pieces that make them who they are.

Brooke is equally as proud of the black culture that shapes her.

When I was Brooke’s age I wasn’t thinking about college or racial identity…I wanted to be backup dancer in a Puff Daddy video.

I’m serious… that was my 8th grade aspiration…

Brooke is sooo much better than me at that age and I’m so proud of her!

Life with Brooke is getting tougher.. not that she’s a bad kid.. not that the teen years are hard. I mean they are.. but then teen years are the years where she makes the decisions that will shape her adult life.

We talk about her adult life and she’s excited, I’m excited.. but I’m also a little sad.

That’s my first born child. My little baby that I took with me to college..

I can’t believe we’re actually talking about her attending college… next year Brooke starts 9th grade at the same high school I went to.

My baby is going to High school…time really flies doesn’t it.