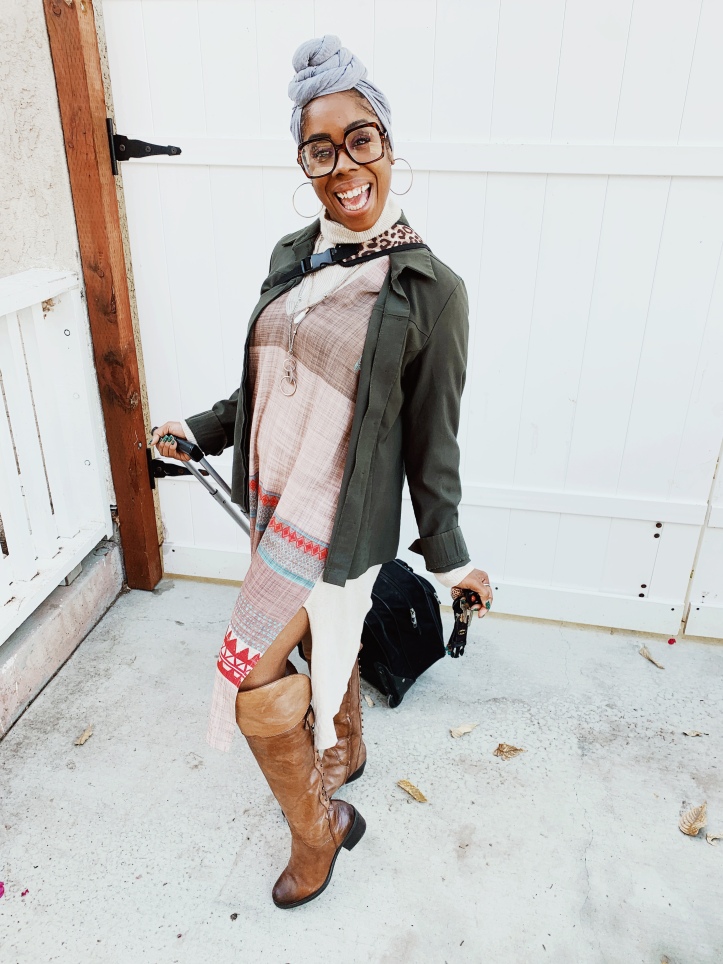 I’ve loved acting ever since I can remember.

Just give me script, a mark, a stage or a camera and I’m home, some people are just born performers. I am some people.

I love to create and entertain. It’s just who I am and what I love.

I’ve always been afraid to admit because well, people always judged me about it. Made remarks, called me silly.

I kept my acting aspirations inside.

In high school I was in the school play just about yearly.

I even did drama competitions, I won quite a few trophies acting.. in fact the only trophies I ever won were for acting and cheerleading.

I wanted to be an actress.. but I was also a realist and in 2003 there was no Issa Rae, or Lupita Nyong’o for me look up to.

I felt that even though I had passion and talent I wasn’t going to “make it” as an actress because I’m black and I’m dark skin.

I didn’t feel like my “look” would get me any parts.

I just let my dream kind of die because I didn’t feel like it was attainable at all. I wasn’t Hollywood material and I accepted that.

Fast forward to 2016.. Chris and I saw an advertisement for a new show on HBO called “Insecure” 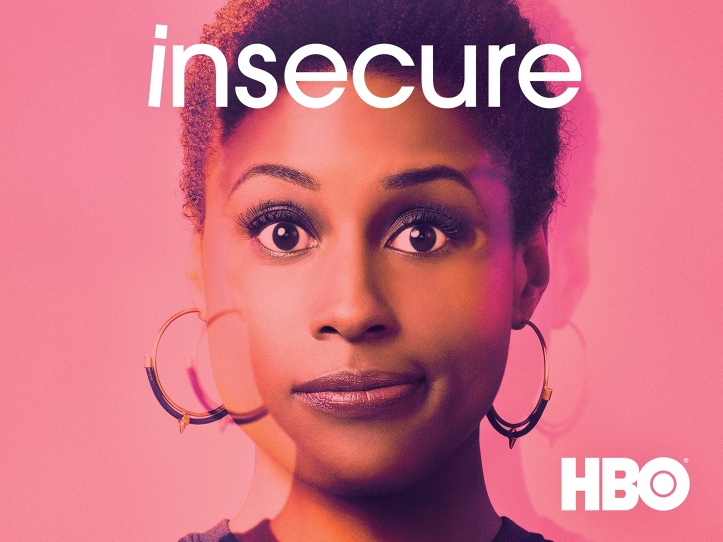 The show started Issa Rae and Yvonne Orji as two friends in there 30’s loving, working, growing and living life in L.A.

I saw two beautiful, intelligent black women.. doing the things I was doing! 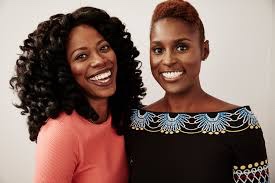 Issa and Yvonne portrayed they type of characters I longed to see.

They portrayed the characters I wanted to play.

I was smitten by the show and I honestly I was hooked on the cast.

I was just so happy they were on my screen!

I turned to Chris and said.

“Baby, if they’re making black shows, that means they need black actresses! I’m a black actress! Baby it’s my time! I know this sounds crazy but I want to be on that show. I miss acting I want to be there so bad.”

My then boyfriend, now husband said “I can see you up there with them. Do it baby!”

I watched every episode… I stalked Issa Rae online and I adored all the press she garnered.

I love that Issa is so unapologetically black.

I love that Issa is a Stanford grad that didn’t see herself represented so she created her own content.

The series written by Issa was picked up HBO and the rest is history.

I saw myself in Issa. I’m a writer.. I’m pretty awkward and I love creating, acting, writing.. all of the Issa things.

I promised myself one day I’d get an invite to Issa’s yacht party for black Hollywood. 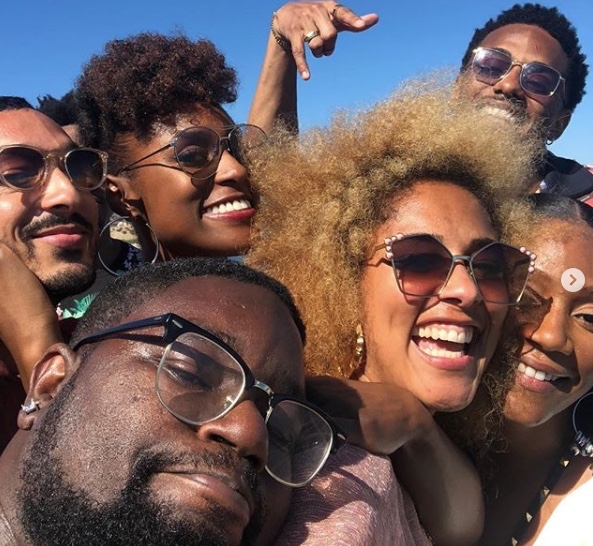 How to get into background acting

I started submitting myself to talent agencies in 2018 after I started creating content on my blog and Instagram.

I talked to friends I knew in the entertainment industry and a few of them gave me the names of their agencies and agents and I reached out to them.

When searching an agency be sure to search “talent agency” in your area and simply ask them if they allow public submissions.

Some agencies will accept submissions.

Many agencies will not.

Just reach out and ask.

Don’t be discouraged if anyone says “no” just keep reaching out.

I reached out to several agencies over the course of about 6 months and I was picked up after my agents assistant saw my content and how persistent I was.

I was finally picked up by a talent agency after submitting headshots, a reel and a resume.

When you submit be sure to have a good headshot. The headshot is what is going to be getting you work.

I was sooo excited about finally landing an agent!

I didn’t really know what all that meant but I knew I at least had a foot in the door, and someone to submit on my behalf.

My agent told me to make an account with La Casting. The agency gave me a special code to use since I was represented talent and I used it when I created my profile.

He also told me to submit myself for background roles so I could make extra money, make connections and get experience working on set.

I did just that.

When submitting for background work you want to make sure you have a great headshot so casting agencies can see what you’re working with.

I signed up with L.A casting in September. My headshot wasn’t the greatest so I wasn’t landing much work.

One day Chris and when out to take headshot photos to I could submit for better jobs and it worked!

The first thing I booked was a background role on “Insecure”

I know it was all because I updated my headshot!

I was happy I burst into tears!

It was everything I wanted.

It was like the universe had come full circle.

It’s just background but I was there.

I worked on a set for two days with Issa Rae and Yvonne Orji.

I saw them several times but I did say anything to them of course.

I was there for work.

I wanted to be extremely professional so I just ate my food.

I did look at them though 🤣

I had to drink in that black excellence with my eyes only.

I couldn’t believe where I was. I kept closing my eyes to just hold on to the moments a little longer.

I took those experiences as a sign to keep going.

I mean I don’t think I’ve ever been so happy to stand for 12 hours.

I love being a small part of something HUGE!

There’s so many parts that go into your favorite Tv shows.

A single 4 minute scene can take several days to shoot. You have to deal with sirens, helicopters etc.

I live about 80 miles from Los Angeles so I had to deal with traffic, take a nap and eat lunch in my car but honestly I didn’t even care!

I was a working actress for two whole days.

It was the best two days of my working life.

I knew that day acting was what I was supposed to be doing.

It was kind of like drugs.. one taste and I was addicted. I just wanted to work more and more jobs!

I met so many amazing people.

I met an 18 year old from Texas that uses acting as a side job to pay bills… she didn’t want to call her mom and I was like “YOU MOM IS WORRIED ABOUT HUMAN TRAFFICKING! CALL YOUR MAMA”

That got me the nickname “mama Shayla” on set🤣😭 they couldn’t believe I was 35… I didn’t feel 35 that day. I was about 18 myself those days.

I was trying something new and it felt amazing.

I wasn’t nervous, wasn’t anxious. I felt right where I needed to be.

I met several young people in their teens and 20’s ust happy and youthful and fun.

Many of them act full time.

I met a 65 year old man who was divorced and now living life on his term and his dream was to be an actor.. it was just so nice to be around that energy.

That newness, it was intoxicating.

I heard so many stories of people that had only been in California for a couple most.

I admired their bravery. I was almost jealous of it.

Here I am nearly 35 and almost terrified to take risk.

One young man Malcom told me “I’m challenging you to a year of no fear.. just do what you want! Stop being scared!”

I told him I think he was meant to sit by me and tell me that because I didn’t express it.. but he hit the nail on the head.

I was just in love with the whole experience of being a background actor.

When you’re a background actor, you’re placed in a small area with people all night.

There’s snacks and coffee to keep you awake in order to shoot all night… it’s really cool.

I loved every second… it was like 12 hours worth of seconds, plus a two hour drive home but I was so happy I didn’t care about anything else… I was a working actress for TWO DAYS 😭🤣

I know it doesn’t seem like much but those two days were a dream come true..

I framed my paystub when it came in the mail.

It was proof I was really there.

My family was so proud.

I was so proud.

I never thought in a million years I’d be any where near Issa Rae and Yvonne Orji.. but I was acting.. in the background. 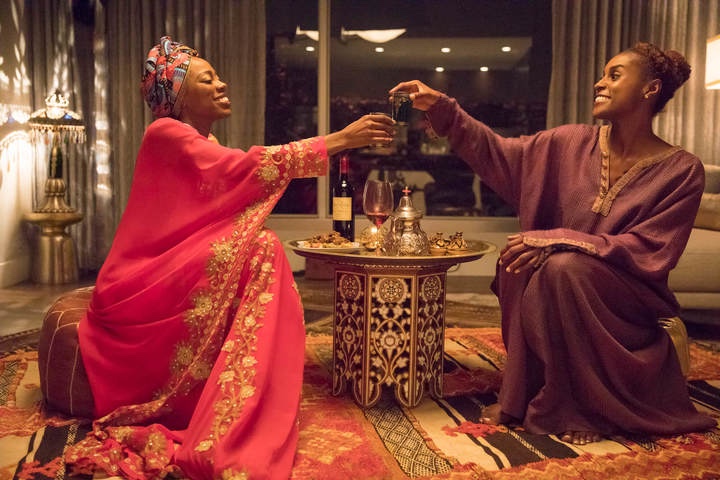 I’ll let you know when the episodes I’m in air.

I promise you’ll love it.

I hope this post inspires you to keep dreaming and keep working toward your dreams.

I think in life we talk ourselves out of our own futures.

If you don’t yourself somewhere..

create a place to be seen… Issa did.. I’m trying to follow my dream and you can too.

Be excellent to each other and go watch Insecure!