Whew Chile the episode!! Soo much to dive into as always!

There are some spoilers we are going to be discussing somethings in detail here so don’t be upset!! Soo if you didn’t catch last weeks episode here’s the back of my head on Lawrence and Issa’s date

(No for real 🤣🤣 I’m a actress.. I was an extra on set that day and I was sell art in the background when Lawrence and Issa were at the art walk last week.. anyways.. back to this week..)

This week 🗣THE ARE HAVING SEX all over the place..

I mean they are gettin it!

and even sharing laptop space.. it’s serious .. it’s only a matter of time before good ole’ Nathan pops up..

And he DOES.. like a hot smoldering rash.. that’s also a freedom fighter in his spare time

The man is like 9 kinds of fine.. it’s ridiculous! But I digress back to Nathan and “Insecure”

So Issa has been doing the wild thang with Lawrence and she feels bad about since she’s been hanging out with Nathan.. she feels like she should be honest with them both.

Oh now back to Issa.. there’s a scene where she’s thinking about what she wants to do in regard to the situation with Lawrence and Nathan

She wants to call Molly but they aren’t talking “Insecure” Low Key Done.. she even tries to play out the scene of calling Molly in her head but that ends up with Molly accusing her of using her.. but she faces her fear and calls her..

And the result is some of the best brunch jokes I’ve every heard in my life! I love the writers of “Insecure” so much!

I think this scene was pivotal they needed to establish communication for one.. and I think everyone else was getting back together why not see if Issa and Molly could give it a go 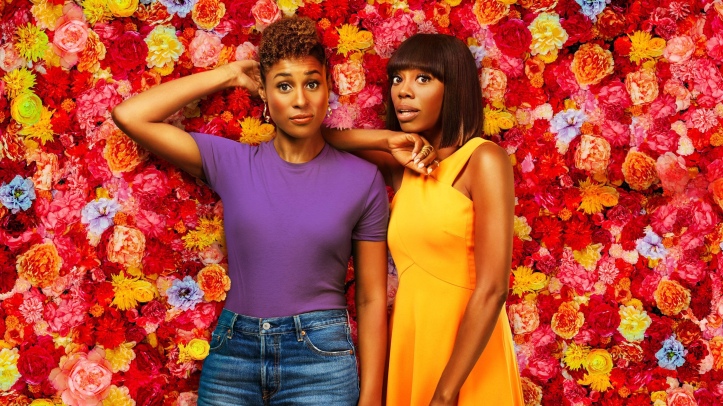 You could really sense the tension in the scene however… Issa was looking over Moly shoulder the usual banter between the was strained and non existent.. it was so forced and unnatural.. I made you really miss the old them but it was just nice to see them together it was nostalgic. Issa even tried to show Molly she was offering to HELP Nathan with his move, so show she wasn’t using people.

Also in this episode Molly screws.. Andrews brother Victor got them clipper tickets but Molly was like “Nah” because she’s Molly 😒 and may have soured a PEACE offering being MOLLY

The brother is SORRY and I’m not sure Andrew is going to take much more he’s level headed not MOLLY proof.

Next Scene Issa going to Honest and Tell Nathan she’s doing the Nasty with Lawrence but it doesn’t go as planned..

First of thank you Issa Rae for showing a black man with Mental illness and not making it such a “big deal” he has roommates.. he just navigating through life life and trying to get his shit together.

I can totally relate to not wanting to be seen as “crazy” that’s real.

People tend to immediately dehumanize you and don’t want to be seen around you, crack jokes, want to talk about you or want to you see what you act like now.. it’s really not even about you want more they just want to see the shit show.

I am so glad Nathan is just one of the guys trying to find love.

Nathan was “insecure” about his Mental health issues

I can totally relate to that.

I am so happy this show is tackling black mental health issues and dating.. I mean they exist! We exist it does happen!

I was so happy this scene was included because I’ve had this scene so many times in my life I’ve been Nathan bipolar men and women tend to ghost people because we just don’t understand what our emotions are doing and we think it’s better to ghost you at the time then make you see us the way we “are” if that makes sense but I’m so happy “Nathan” exist and he’s a beautiful black man that makes people ask question about bipolar disorder!

Once again “Insecure” is winning in my book!

Now back to the review..

So the night continues Issa, Molly, Andrew, and Nathan all hang out and it’s all good till Molly wops 😒 and text the wrong person.. she text Issa

Issa thought things between them were fine.

It was gut wrenching and they didn’t even fight for each other!

I would have had to say more than “ok” for my best friend and our friendship but that’s just me 🤷🏾‍♀️ they just let things go to easy.. seems like they fight more for these men then they do for each other…